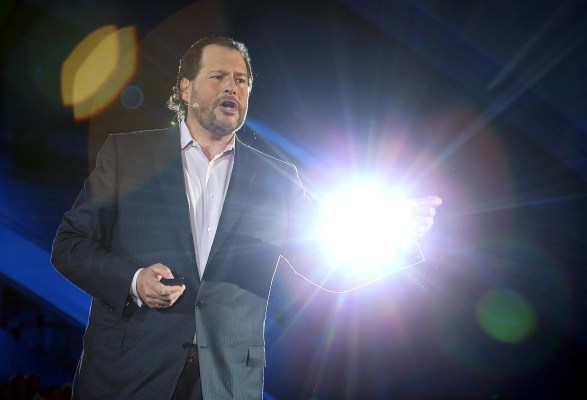 Salesforce today announced that it intends to buy MuleSoft in a deal valued at a whopping $6.5 billion. That’s not the selling price, but the amount the company has been valued at based on stocks, bonds and cash on hand. The exact price was not available yet, but the company did indicate it was paying 44.89 per share for Mulesoft, a price that represents 36 percent premium over yesterday’s closing price, according to Salesforce .

What’s more, the deal values each MuleSoft share at $36 in cash and 0.0711 shares of Salesforce common stock.

Rumors began swirling this morning after a story broke by Reuters that the CRM giant was interested in MuleSoft, which launched in 2006, and went public almost exactly a year ago.  It gives Salesforce a mature company to add to its arsenal with 1200 customers. It also gives them an API integration engine that should help the company access data across organizations regardless of where it lives.

This is particularly important for Salesforce, which tends to come in and work with a company across enterprise systems. As it builds out its artificial intelligence and machine learning layer, which it has branded as Einstein, it needs access to data across the company. A company like MuleSoft gives them that.

But of course, Salesforce gets more than tech with this purchase, which it can integrate into its growing family of products. It also gets major customers like Coca-Cola, VMware, GE, Accenture, Airbus, AT&T and Cisco. While Salesforce may have a presence already in some of these companies already, Mulesoft gives them entree into areas they might not have had and gives them the ability to expand that presence.

What’s more, the company has big revenue goals. Having reached $10 billion in revenue faster than any software company ever has, a point that Chairman and co-founder Marc Benioff has been happy to make, they have actually set their sites on $60 billion by 2034. That’s a long way away, of course, but having a company like MuleSoft in the fold, which made $300 million in revenue will certainly help.

Ray Wang, founder and principal analyst at Constellation Research says this about building a microservices future, Microservices are a way of building applications made up of small, distinct pieces, rather than a single, monolithic application we tended to build in the past. This makes changing and updating easier and more efficient.

“This is the heart of Salesforce’s M&A strategy. They have to integrate, orchestrate, and manage microservices in their future roadmap,” he said. “The AI-driven world ahead needs contextual microservices,” he added.

Brent Leary, owner and principal at CRM Essentials, a CRM consulting firm, sees the deal through a customer prism. “Well it shows just how crucial IoT and AI is to the future of Salesforce ‘s ability to create the customer success platform of the future,” he said.

This is a developing story.