Called Maslo, the new app (and the company behind it), in the words of its founders, to develop a “personified AI technology that interacts with empathy and playfulness.”

At its core, the first iteration of Maslo is a daily check-in tool that encourages and develops mindfulness, according to founders Ross Ingram and Christina Poindexter.

Once downloaded, Maslo is a voice-activated journaling tool with a basic status update feature that encourages users to log an emoji representation of their emotional state a particular moment, and spend a minute talking to the app about what’s going on.

The idea, the founders say, is to have Maslo evolve and personalize as users interact with it. You can see what the company’s blobby AI looks like below.

Ingram, who was a former Sphero employee working on projects like the BB-8 before he joined Google, has thought deeply about how technology intersects with the human psyche and how people create bonds with the technologies they use.

“We started building robots in 2010 and in the 2012 to 2013 timeframe we wondered what this would look like if we added some personality to this — and some kind of relationship,” says Ingram. “Whenever we launched these robots out into the world… people had this desire to connect on a deeper level… people wanted to share aspects of themselves with the robot.”

Meanwhile, his co-founder noticed the same behaviors from people who were interacting with the Google assistants in their early days.

“A  lot of these interactions were non-utility queries,” says Poindexter, a Yale-educated sociologist, who worked on Google’s soon-to-be-announced assistants in the Pixel phone and Google Home in 2016 when she and Ingram first met.

“There was this need to go in and help people on a deeper level… I have a background in sociology and I look at it from a users’ perspective of what do people need,” Poindexter says. “A lot of these interactions [with the assistant] were mulling things over and needing a place to express them….and Google can’t deliver on that and from a brand perspective Google didn’t want to.”

By contrast, Maslo wants to be a space where people can more comfortably address the emotional aspects of user’s lives.

“It’s the way we define an assistant vs. a companion… assistants help things get done in the external world and companions are going to help us get things done in our internal world,” says Ingram.

“There are going to be different classes of machines that interact and relate to humans on different levels,” Poindexter adds. “We are seeing thousands of people using machines for assistant based things… we know that where this is going we’re going to start talking more to whatever you want to call them — assistants or companions — and Alexa won’t help you figure out if you need help.”

With Ingram’s experience in design and hardware, the two came to the conclusion (as they relate in a blog post about Maslo’s early days), that technology “can help us become more human, and less robotic.”

Ingram left Google in December of 2016 and Poindexter followed in February. The two moved down to Los Angeles and began collaborating on the project that would eventually become Maslo. 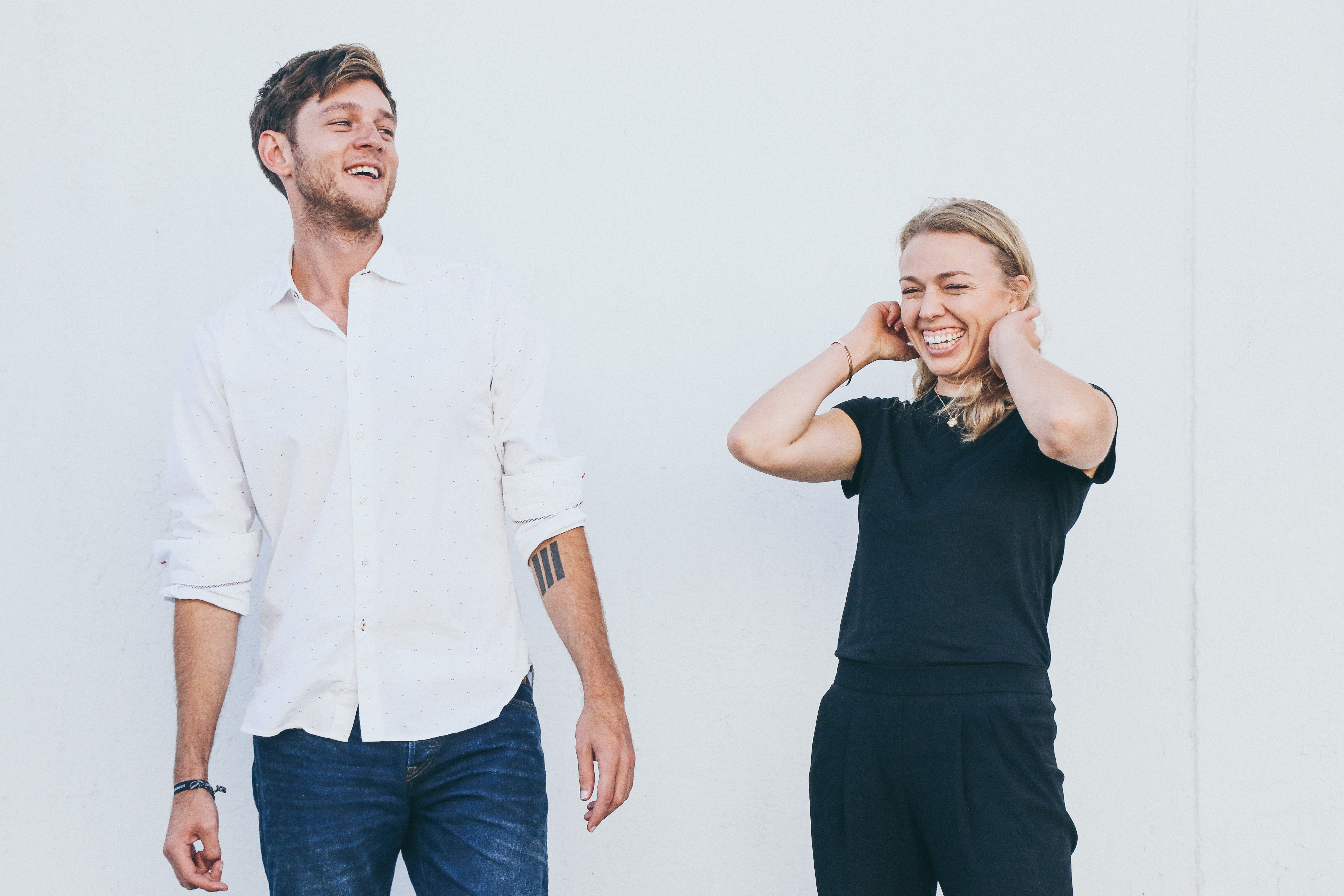 Over the long term, the two founders think of Maslo as a gateway to interacting with other services that a user may need — and one that is completely focused on security. Other tools can help with therapy, self-improvement, education, or entertainment, and Maslo wants to be the funnel that prompts users to take advantage of those services when necessary.

Importantly, in this era of increased privacy protection, the two have built Maslo so that most of the user information that Maslo collects stays on a user’s device rather than on servers that the company hosts. “Privacy and trust is the most critical to us,” says Ingram. “We’ve designed the architecture in a way that does keep a lot of the sensitive information on the phone. We do have to upload some things to the cloud in a secure way to continue to develop Maslow’s back end and machine learning… [But] we don’t have access to the actual voice note… we are able to interpret whatever is shared using our algorithms.”

Meanwhile transformative powers of technology and the ways in which it can provide a positive influence in people’s lives isn’t just rhetorical hyperbole for Ingram — he’s experienced it himself.

At 16 years old, Ingram, who grew up in a small town in rural Colorado, faced three felony charges and expulsion from his high school for stealing a computer. Always interested in technology, Ingram came from a working class family that didn’t have enough money for him to indulge in his favorite pastime.

The brush with the law could have landed him in jail, but Ingram was sent to a diversion program to keep kids out of prison and while there, the young developer decided to pursue a career in computer science. He enrolled in Denver’s Metropolitan Community College and while attending class managed to talk his way into a job with Sphero.

Ingram met the Sphero founders when they were just a collection of Boulder-based Android developers going through the Techstars program. When the company raised its first round, Sphero hired Ingram as its 7th employee and his career was off to the races.

“Going through that experience… helped me develop my sense of identity and figure out where I wanted to go in life,” Ingram says. “That’s very much what we’re focused on with Maslo today. Maslo is a reference to Maslow’s hierarchy of needs and developing the tools you need to have that sense of self.” 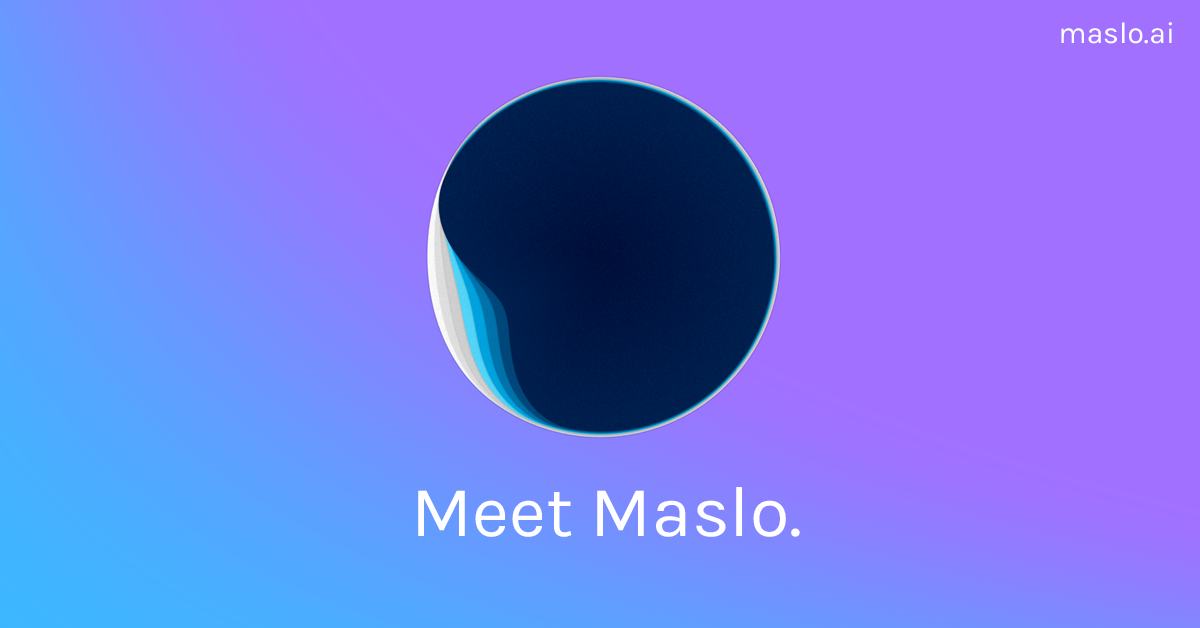 Several studies (including this one from the University of Iowa) discuss the positive effects of journaling on mental health and addressing trauma. And Poindexter said that’s where Maslo wants to begin.

“In the beginning there needs to be some sort of joy in the exercise,” she says. “We really want to reflect back to people what they’re saying… [Maslo] holds up a mirror… it’s a sounding board and doesn’t necessarily give you the answers but shows you what you might already know.”

Over time, the two co-founders expect that the application will evolve to become more personalized as users develop a relationship with the AI they’re talking to. “The way that Maslo looks and the way Maslo animates and talks will be something that happens down the road,” says Ingram. “Being able to build this sense of companionship between machine and the user so that it is this safe space to access is very important.”