Playing a new Civ game is like driving a new car in a foreign country. Lots of things feel familiar, you sort of know what you’re doing, and the end goals are broadly the same. But there are a lot of new buttons to learn, things aren’t necessarily where they are supposed to be, and sometimes you have to fight the natural urge to drive on the other side of the road.

Civ VI’s victory conditions are largely the same, but the paths to victory have changed. New features have been introduced, and its mechanics connect together in a more sophisticated way. Specialization is more crucial than ever, most vividly with the new city districts system, but also when it comes to research, unit promotions, and government and policies.

1. Research has had a facelift

One of the first things to strike you when you open Civ VI is the new purple box underneath the traditional blue research box. In Civ VI, research has received a major overhaul and there are now two tech trees.

The new civics tree, which relies on your culture output to advance, unlocks some units, buildings and wonders, but its main function is unlocking new government types and policies to go along with them. Governments and policies are sort of a combination of Civics and Ideologies from Civ V, but with a lot more customization. Policies can be changed for free after any new civic advance, or for a gold cost at any other time.

Different governments have varying policy makeups, letting you choose a different number of policy cards from across the three categories (along with Wildcard policies, which can be from any category).  The governments also have inherent bonuses, such as a Merchant Republic granting extra trade routes, as well as “Legacy bonuses” which accumulate over time, and encourage you not to change governments too frequently.

Meanwhile, the more traditional technology tree isn’t too different to previous Civ games, but the “Eureka!” boosts (which are also available in the Civics tree) make the process of researching new technologies a lot more involved than simply choosing what to research next.

These boosts, granted for fulfilling specific conditions such as building mines, or researching a specific combination of civics or technology, will instantly get you halfway towards completing your piece of research.

This means with careful planning you can give yourself a serious research advantage. It also means you may research things in a different order, to take advantage of the boosts as they become available.

It shakes up the approach to technology and means that instead of following the same tech-tree path in each game, you’re more likely to adapt your choices on the fly, leading to much more varied outcomes.

2. Buildings have escaped the city

As you dig further, the bigger mechanical changes become apparent. City building is now a much more in depth affair, as buildings are no longer crammed into the city centre but placed out onto the map in “districts”. These districts make city specialization more important than ever, as they replace the resources on the tile underneath them, meaning there isn’t room for more than a handful in any given city.

Placement of the districts is important too, as they gain adjacency bonuses from appropriate resources and tile improvements. For example, the “Campus” district which houses science buildings gains adjacency bonuses from being next to mountains or rainforests. Furthermore, some late game buildings affect not only the city the district is in, but all cities within a 6-tile radius.

This means that with some careful planning, late game cities can enjoy some of the bonuses of districts they don’t themselves have. Or, district bonuses can overlap creating powerhouses of production or culture.

Building a new district involves a trade-off, as you lose access to the resources on the tile underneath

Wonders are now also placed onto the map like districts, and as well as technology requirements often have specific placement conditions such as the Great Library requiring a campus next to it, or the Colossus being on the coast. Again, this means more planning is needed than in previous Civ games, and finishing a wonder really feels like an achievement instead of just being like any other building.

Another change is the way happiness works and interacts with city growth. In Civ VI, empire-wide happiness is gone and is replaced by “amenities” which are city specific. Cities require a number of amenities to stay happy, a number which increases as the city grows. Maintaining more amenities than required leads to production bonuses, not having enough slows growth and reduces yields.

Amenities can be provided by things like luxury resources (which are empire-wide), specific buildings in the Entertainment District, and civics. They can also be reduced through war weariness and bankruptcy, so as with many of the game’s other mechanics they are integrated into the others things going on in your empire.

As well as needing to provide amenities, city growth is limited by available housing. This provides more of a hard cap on population growth, and can be increased through certain tile developments, civics, and in the later game through the “Neighbourhood” district. Again, this mechanic forces you to specialize your cities more as you won’t have enough population in one city to cover all of the different things you need to produce.

3. Your trusty workers are gone, and have been replaced by builders

Gone are the trusty workers who would be by your side from the Stone Age to the Information Era. “Builders”, who create tile improvements such as mines and farms, can only be used three times (although in certain circumstances this can be increased) before they disappear.

On the plus side tile improvements are performed immediately, meaning there is less need to wait around with a warrior to protect your workers from barbarians while they spend a hundred years setting up a wine plantation.

Along with these luxury and strategic resources which the builders can develop, there are bonus resources like stone and sheep dotted all across the map. As well as the usual placement of mines or pastures to increase yields, they can be harvested to provide a one-time bonus of a large amount of hammers or food, at the cost of being removed from the map completely. This provides an interesting dilemma, should you harvest the stone to complete that wonder Cleopatra is also building, even if this lowers the resources in that city permanently?

Roads are no longer built by workers but by “traders”, the equivalent of caravans/cargo ships in Civ V, which set up trade routes between cities and build roads along them automatically. While this restricts your ability to plan your own road networks, it prevents the road spam prevalent in earlier games in the Civ series, and it removes the sometimes crippling road maintenance costs of Civ V.

Another major advantage is that these roads are constructed across borders, speeding up the movement of troops into enemy territory during wars. A particularly nefarious strategy would be to send trade routes to all of an enemy’s border cities before declaring war and taking advantage of the newly built infrastructure.

4. The AI has way more personality

The addition of agendas goes some way in explaining AI behaviour, or at least gives a legitimate reason for the other leaders to hate you. Each leader has one historical agenda that’s revealed to you, and another that’s hidden and can be discovered through diplomacy or espionage. Peter the Great for example has the “Westernizing” Agenda, which means he respects players who produce more culture and science than him, but hates those producing less. Playing around these agendas adds another layer to diplomacy in Civ VI, and gives the other leaders much more personality.

There are also “rumors” which appear throughout the game, often coming from your spies and traders, which let you know what other players are getting up to. These range from technology developments to declarations of war.

While some of these are genuinely useful, a lot of the time they are unnecessary. At one point my delegate informed me urgently about my own delegation to Scythia. This may be a bug which will be patched out in a future update, but having the option to filter out useless information would be helpful.

City-states have returned from Civ V, but they function slightly differently now.

5. It's still one-unit-per-tile, but there's a twist

By limiting each tile to a single unit, Civ V made the biggest change to warfare in Civ’s history, and in comparison Civ VI’s changes are incremental. The one-unit per tile rule generally holds firm, though later in the game units can be merged to form more powerful “corps” or “armies” which have higher combat strength. Civ VI also introduces support units, like Siege Towers or medics, which can share a tile with a combat unit and provide bonuses such as enabling a unit to bypass city fortifications.

A great new addition to help organizing your forces is the “Escort Formation”, which allows you to attach non-combat units to combat units for protection. This is handy for escorting a settler through areas of heavy barbarian activity in the early game.

Unit promotions are more specialized than in Civ V, with each different unit type having a promotion tree which can add combat strength in certain situations for example. You might want to increase the firepower of a ranged unit, while increasing the resistance of a frontline melee troop to ranged attacks.

Conclusion: Lots of changes, but still a game for the fans

It should come as no surprise to anyone reading that Civilization VI is a deep game, and it’s would be impossible to discuss everything in depth here. We could spend another thousand words gushing effusive praise for Christophe Tin’s opening music and the score as a whole, and Sean Bean does a fantastic job with his narration (although disappointingly he doesn’t appear to die at any point during the game).

We’ve also not had the chance to approach the game’s multiplayer component In our short time with the game.

We do have some minor gripes with the game. Certain parts of the UI lack polish; There is nothing tracking your progress towards technology boosts, the tooltips don’t fully explain things like adjacency bonuses, and the mini-map could really benefit from being adjustable (currently it’s too small to really make out what is happening). 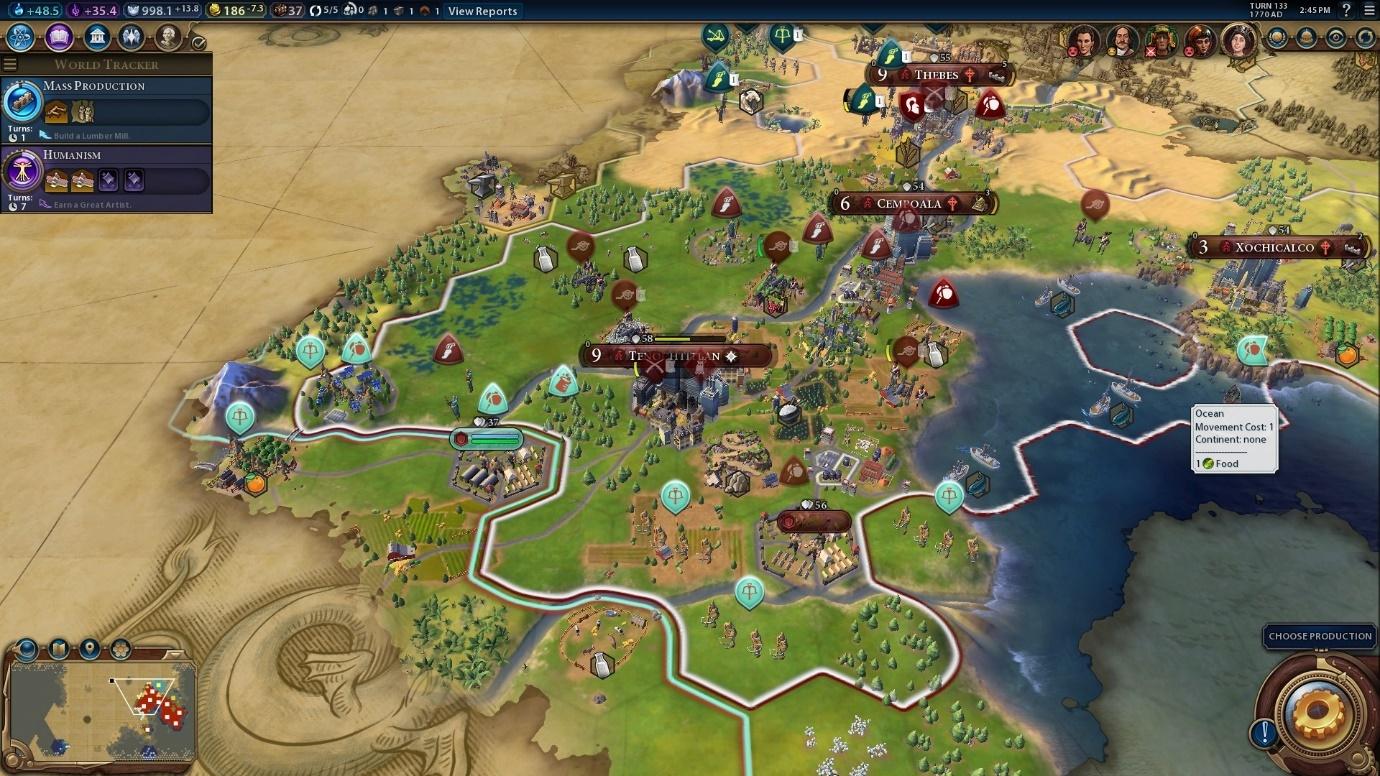 The game also lacks any single player scenarios, though we’d be surprised if these didn’t arrive as DLC alongside new civilizations to try out.

There’s no escaping the fact that if you’ve disliked Civ games in the past, then Civ VI probably won’t be the one to change your mind. It’s an iterative update over the changes made in Civ V, and while many of these additions are positive ones, they’re not fundamental changes to the game.

Nevertheless, Civilization is a series built to stand the test of time, and Civ VI is testament to that. Long-time fans of the series will find the new mechanics interesting enough to differentiate from previous entries, while newcomers will find possibly the most polished and complete-feeling entry yet.

Now excuse me, I have some sorry looking Aztecs to finish off.