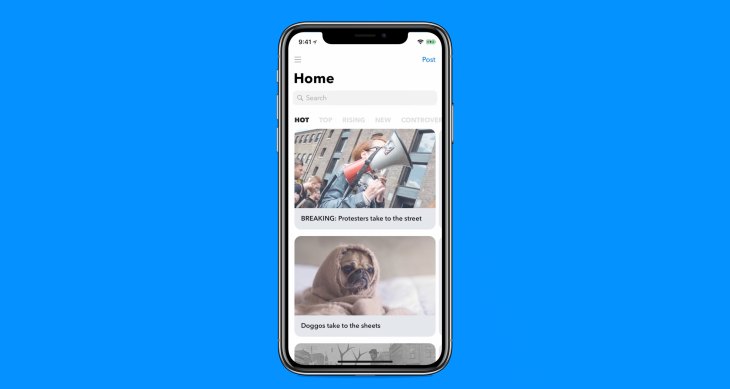 One of the many accusations about the trouble with Facebook – amid its data privacy concerns and enabling of Russian trolls – is that it keeps people locked into echo chambers where access to other viewpoints are limited. This is a common problem across social media, people are beginning to realize. A new app called Burst is experimenting with how to break people out of their bubbles. But its focus is not on Facebook, as it turns out – it’s on Reddit.

In a way, Reddit has a problem with filter bubbles too, given that users choose which subreddits (communities) to subscribe to. That means than in addition to subscribing to something like r/politics, you may also subscribe to r/liberal or r/conservative, where you’ll hear your own viewpoints echoed and reinforced.

What Burst does is combine everyone’s comments and insights into one place. It works by finding everywhere a post has been re-shared across Reddit, then merges all the comments together.

The app is organized like Reddit itself with sections for Hot, Top, Rising, New and Controversial as well as access to your own subreddits when you sign in. To view the comments on a post, you swipe to the left. And to upvote or downvote, you use Force Touch. 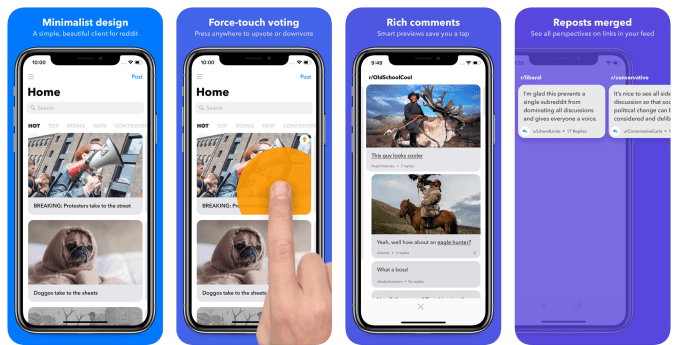 Explains the app creator Alex Duckmanton, currently a product designer in Sydney, Burst has exposed him to different ideas.

“In my own use of Burst while testing, I’ve found that even though I see a lot more stuff I don’t agree with, seeing it helps me empathise with other perspectives. It’s my hope that this will help tone down some of the more toxic aspects of political discussion online,” he says.

While political discussions are often a hotbed for trolling and the general social media-induced lack of empathy, an app like Burst can help in other areas, too. For example, notes Duckmanton, a post about the new iPhone might appear in both r/iphone and r/android, in addition to r/apple or r/technology. This allows you to see a wider array of discussions about the iPhone news, than if you only read the comments from one community.

Duckmanton says he began to build Burst when he had some time off from work in the second-half of last year because he’s been concerned about the impact of filter bubbles on social media platforms.

“Filter bubbles aren’t being addressed in a meaningful way by any of the major social platforms,” he says. “The typical response of banning problem users or removing content is a brute-force approach and isn’t long-term or scalable. Outside of that, users are expected to self-manage the content they consume in order to have a more balanced view. It’s not reasonable to expect that of people, and it certainly won’t happen for people who aren’t already engaged in news and politics,” Duckmanton continues.

“We need to create products in such a way that filter bubbles cannot exist because their design fundamentally prevents them,”he adds.

The project is entirely self-funded and is currently supported by ads with the option to remove them via an in-app purchase.

Now that the app is out in the wild, Duckmanton says he’ll see how the community reacts before deciding if he will transition to working on Burst full-time. If it were to take off, however, he imagines a future where a Burst-like app could be built for other platforms – like Twitter. But in the immediate-term, nothing like that is in the works.

Burst is a free download for iOS. A link to sign up for an Android beta is here.

Source Link: Burst breaks you out of your filter bubble on Reddit