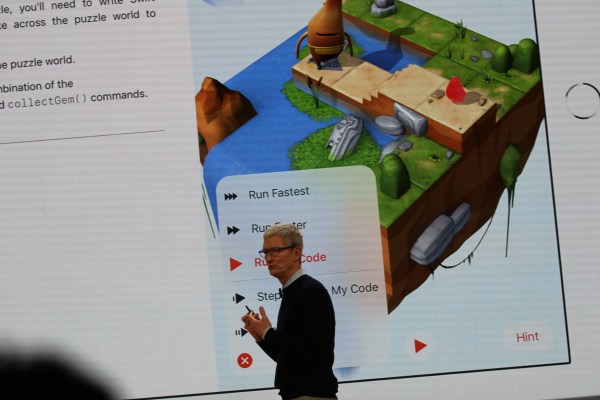 Amid a flurry of educational-related announcements at Apple’s press event this morning, the company also unveiled a new feature in its learn-to-code app Swift Playgrounds, that will help teach a younger generation of iOS developers how to build AR-enabled apps. Apple has been heavily pushing augmented reality and its ARKit for developers, as the technology is expected to usher in a whole new ecosystem of smarter apps that can interact with the real world – whether that’s Pokémon-style games, apps that help you pick out your next sofa by visualizing it in the room, apps that animate real-world objects, help you learn, or just entertain.

Now Apple wants to encourage novice developers to get into AR, too.

Swift Playgrounds was first introduced in 2016 as a new tool for teaching kids to code. The app ships with a number of basic coding lessons and challenges, but with a more graphical and engaging interface than some other learn-to-code apps had in the past. It’s also distributed as an iPad app – meaning it’s ready for schools where iPads are used in the classroom.

The addition of the AR module to app was part of a larger “Everyone Can Code” agenda highlighted several times throughout the event, with a focus on how Apple’s tools can help.

The larger news from this morning was the launch of a low-cost iPad with support for Apple Pencil – the company’s effort to combat Google Chromebook’s growing traction in schools.

Apple didn’t say when Swift Playgrounds would add the AR module, or if it already had ahead of the event.